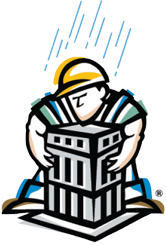 Superior Waterproofing was founded in 1979 by Thomas John Schmitt. Tom sought to obtain the vision of the ideal ‘American Dream’; to build his own small business. He learned his skill in the trades from his late father Ralph Bernard Schmitt and his former employer. Superior made its entrance into the industry through the residential market waterproofing homes, basements and small commercial spaces. All the while, with the help of a few loyal hard working employees and friends; a reputation of quality, honesty and hard work was built.

Through an evolutionary process the term ‘restoration’ was added to the name in 1986. The demand within the St. Louis market for qualified masonry & concrete restoration contractors was on the rise. Tom quickly realized this and was not going to allow this opportunity to be overlooked. Superior Waterproofing & Restoration Company, Inc. was forever transformed in a dramatic way. Superior thus began to take the commercial market head on to fulfill the demand. With perseverance as one of the key driving forces the company grew over 34 year’s by completing one quality project after another.

Acknowledgement of three vital philosophies is and always will be Superior’s Mission; “Always do the right thing, Never take on commitments which you cannot facilitate, and Remember pride is a real virtue to hold in life on a daily basis.” (Thomas John Schmitt)